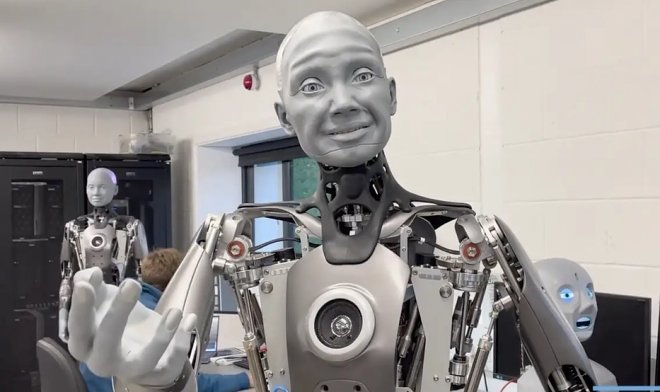 Meet Ameca, the amazing (and not creepy) human-like robot

Human robots, or ‘humanoid’, are increasing in number on planet Earth, and it continues to grow. You might have seen many human robots developed by engineers across the world; however,  Ameca is the new humanoid that looks to be more realistic. We mean, really realistic.

A short promo video released by the company back in december, showed Ameca seemingly “waking up,” looking at its hands and then towards the camera. The 40-second clip has racked up well over 10 million views online since Engineered Arts released it, just a few weeks ago. See the video below:

Ameca is the future face of robotics. It is the most advanced human shape robot globally, presenting the vanguard of humanoid technology. The robot is designed to develop into the future of robotics technologies.

Ameca has grey-coloured skin, with deliberately gender- and race-neutral characteristics. The company describes it as the “world’s most advanced human shaped robot representing the forefront of human-robotics technology.”

It is the ultimate humanoid robot platform for human-robot interaction. The platform focuses on bringing innovative technologies that are upgradeable, modular, reliable, and easy to use. The robot is designed for machine learning and artificial intelligence system, which is compatible with a powerful tritium robot operating system.

The hardware is based on the rich research into humanoid robotics and created on advanced Mesmer technology. Mesmer is an Engineered Arts system for building realistic humanoid robots that are powerful, elegant and cost-effective. Whether you’re promoting a brand, IP or the life of an actual person, Mesmer will never fail to stun onlookers.

Expressive like nothing else, Mesmer can display a huge range of human emotion. Each Mesmer robot is designed and built from 3D in-house scans of real people, allowing us to imitate human bone structure, skin texture and expressions convincingly.

Both the software and hardware of the robot are modular, making the invention upgradeable. All the models are designed to run separately. So, the required part can be used also independently from the entire robot.

Ameca come with natural motions. It has life-like, smooth motions, and advanced expression features, making the robot develop instant rapport with others. The robot is the best choice to develop communication between the metaverse, or digital realm, and humans.

Developed from the root with a cloud-connected focus, all the humanoids benefit from the greatest and latest tech community. It gives access to the robotic data, animate, simulate, and control it as your personal robot, all from anywhere across the world.

The company has developed the robot for purchase, and it is available for rent. The key point to note is that Ameca is developed to convey well via facial expression, but it is unable to walk, even though will do in the future.

Operating Ameca (or any other Mesmer humanoid)

You don’t have to be a tech genius to use Ameca. In fact, you don’t need to code at all. Thanks to the Tritium operating system, any Mesmer humanoid can be programmed intuitively and controlled remotely from any location.

Ameca is considered the world’s advanced human-shaped robot that represents the forefront of human robotics technology. The robot will be shown at CES 2022 event scheduled in Las Vegas on January 5-8 2022.