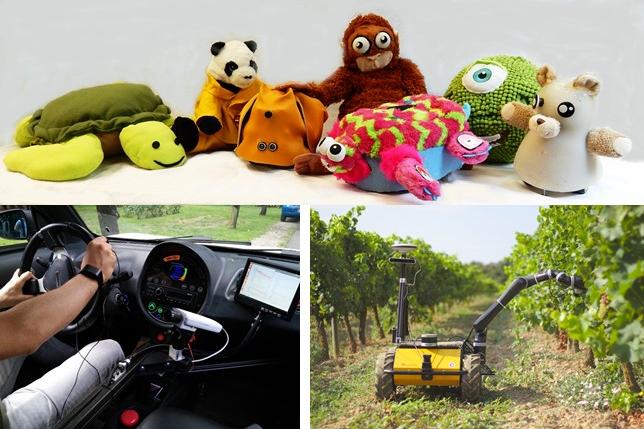 Inside the stand of the Politecnico di Milano - AI & Robotics Lab, visitors will discover the projects:

AI&Robotics Lab
AIRLab was founded in 1973 to support research and teaching in Artificial Intelligence and Robotics of the Politecnico di Milano. The main activities related to robotics of the researchers belonging to the laboratory concern the development of autonomous robots that integrate robotics, artificial intelligence, and machine learning. The applied artificial intelligence techniques are related to the treatment and interpretation of signals in various innovative areas and to the definition of robot behavior.

In agricultural robotics, autonomous robots have been developed for the treatment and monitoring of crops such as grapevine or for the intelligent treatment of greenhouse crops. In the field of autonomous vehicles, some of which are made in AIRLab with various industrial collaborations, algorithms have also been developed for the evaluation of the emotional state of passengers. In the field of social robots, studies on benchmarking of autonomous robots are essential for the development of the relative market and for an effective interaction between social robots and people. The latter has been demonstrated both in entertainment conditions (games, theater, interactive art), and in therapeutic conditions, in particular for the disabled and the elderly.

Dozens of robots have been developed in recent years by integrating the skills of students, researchers, engineers, designers, end users, companies, and institutions, each with their own skills, in a truly multidisciplinary work and research environment. In all this, maker culture has also played a fundamental role and is reflected in much of what is produced.

Andrea Bonarini. Full professor at Politecnico di Milano, Department of Electronics, Information and Bioengineering. Since 1984 he is member of the Politecnico di Milano Artificial Intelligence and Robotics Project, and since 1990 coordinator of the AI and Robotics Laboratory
(AIRLab - http://airlab.deib.polimi.it/). He is among the founders of the Italian Association for Artificial Intelligence (AIIA) and the Italian Regional Interest Group of the IEEE Neural Network Council, now Italian Chapter of the IEEE Computational Intelligence Society (Chair from 2008 to 2010). He has been from 2003 to 2006 coordinator of the Working Group on Robotics of the AIIA. He participated from 1997 to 2010 to the Robocup initiative (http://www.robocup.org - member of the Executive Committee from 2002 to 2010). National representative and Technical work group co-leader in the EU COST Network "LUDI-play for children with disabilities"
.
He has tutored more than 150 Laurea (Master) Theses, some ERASMUS Theses and 15 PhD Theses in the AI, Machine Learning, and Robotics fields. He has participated and leaded several EU, national, and industrial projects. Since 1989, he has realized with his collaborators and students more than 50 autonomous robots. His research interests are focusing on human-robot interaction (in particular robogames, service robots, and robots for people with disability), but still include Intelligent Data Interpretation, Autonomous Robotic Agents, Affective Computing, Reinforcement Learning, and Fuzzy Systems. He has published more than 150 peer-reviewed papers on international journals, books, and proceedings of international congresses.

Matteo Matteucci is Associate Professor at Dipartimento di Elettronica Informazione e Bioingegneria of Politecnico di Milano, Italy. His main research topics are pattern recognition, machine learning, machine perception, robotics, computer vision and signal processing. His main research interest is in developing, evaluating and applying, in a practical way, techniques for adaptation and learning to autonomous systems interacting with the physical world. He has co-authored more than 50 (peer-reviewed) papers on international journals, 25 papers in International Books, and more than 150 (peer-reviewed) contributions to international conferences and workshops. He has been the principal investigator in national and international funded research projects on machine learning, autonomous robots, sensor fusion and benchmarking of autonomous and intelligent systems.

Alessandro Gabrielli is a PhD student in Computer Engineering at Politecnico di Milano, where he received a Master in Computer Engineering in 2015. His interests lie in the field of robotics and machine learning with a particular focus on robotics perception, autonomous car and interaction between autonomous cars and passengers. His research is focused on developing an autonomous driving planner in which it is possible to add constraints that allow a car to drive with a style that is comfortable for the passenger. He is involved in the IDRIVE lab, an inter-disciplinary lab aiming to analyze and model the interaction between driver, vehicle, infrastructure, and environment. He has been involved in some research projects mainly focused on robotics perception, localization and planning.

Riccardo Bertoglio pursued a Master's degree in Computer Science and Engineering at the Politecnico di Milano in 2019. He is currently a PhD student in Data Analysis and Decision Sciences. His research interest is the application of Robotics and Artificial Intelligence in agriculture. The research project is motivated by the 70% increase in food demand that must be achieved by 2050 to satisfy a population of 9.1 billion people. He aims to make a substantial contribution to the introduction of digital technologies in agriculture in a process called Agriculture 4.0. Riccardo is working to establish an interdisciplinary team that brings together engineers, economists, agronomists, geneticists, and biologists. Furthermore, the team is creating a research network establishing partnerships with universities and companies.