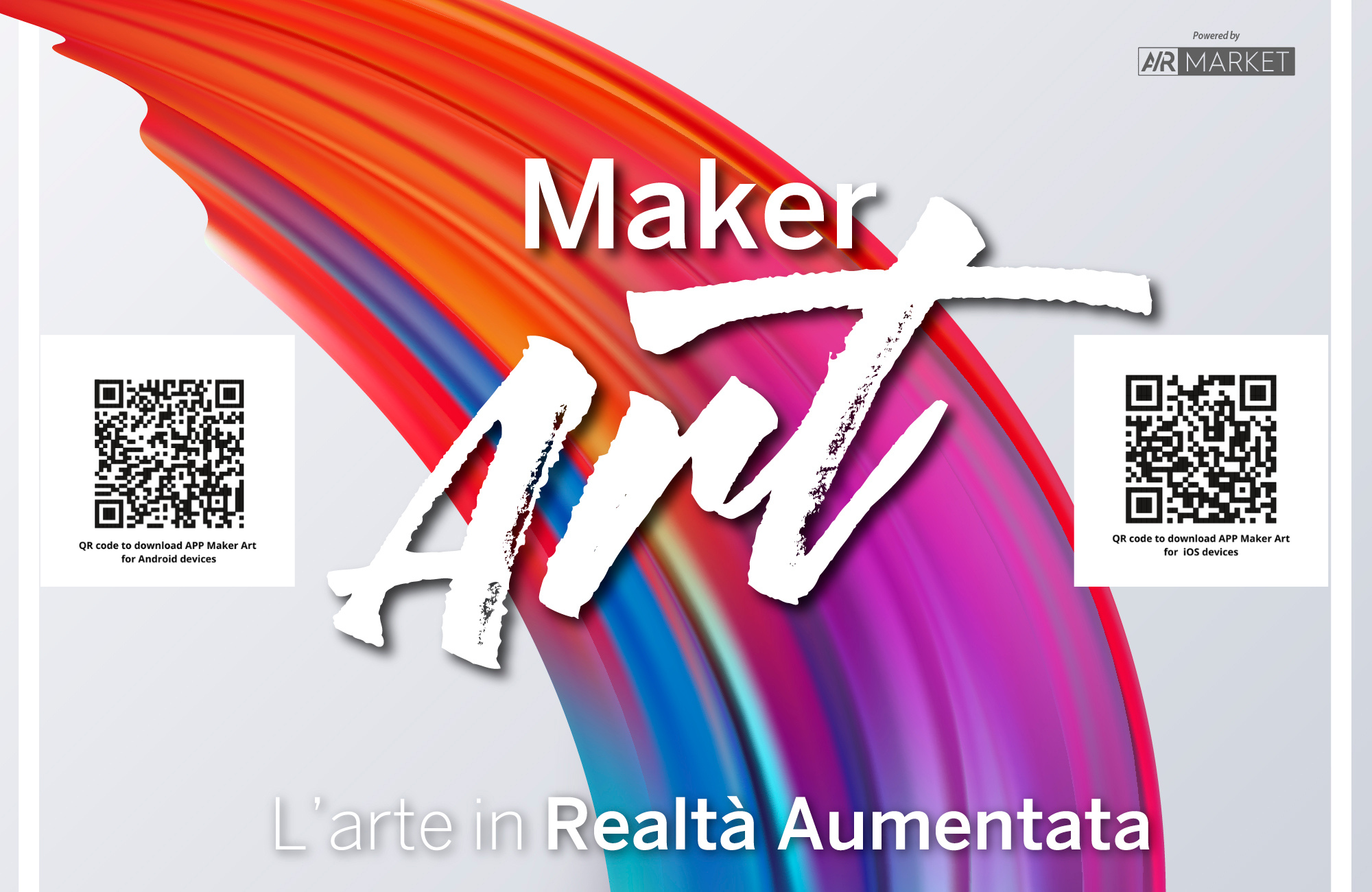 This unique project was born from the collaboration between AR Market, startup with expertise in immersive technologies and partner for Maker Faire Rome 2020, with three important European artists: Antoni Abad, Elena Bellantoni and RÃ¤ di Martino. They will show an innovative representation of their art concepts in Augmented Reality. These artworks created by AR Market for the artists will be experienced by downloading from QR Code the App personalized for Maker Art, simply through a smartphone or tablet, even comfortably at home, leading the spectators in a new dimension, where reality is mixed up with virtual images.

Antoni Abad, with "*BILLIONAIRES" offers an interesting metaphor on the current economic situation and on the relationship between mankind and money. The AR experience is made of virtual cockroaches; these can be crushed to produce coins generating other cockroaches, growing exponentially around the spectator.

Elena Bellantoni, with "FREEZING", will make people think about the suspended period we are living and the frozen relationships that we all are experiencing in the last months where we and our cities are like hibernated waiting for a change to un-freeze us. In a Campidoglio Square completely frozen, a wolf appears howling: "Think about! The end of the world is tomorrowâ€¦"

RÃ¤ di Martino, with "HIC SUNT LEONES", offers an Augmented Reality experience of one of the most well-known squares in Rome - Navona Square - in a dystopian vision of a distant future destroyed by climate change.

AR Market is an innovative startup founded in 2018. It brings the power of digital innovation in Marketing, Tourism, Events and Training /Education, offering contents and applications to grow the business while empowering people with interactive, sensorial and educational experiences in Augmented (AR) and Virtual Reality (VR). In Edutech, as Publisher, AR Market reinvents through AR/VR and gamification, books, stories, game boards and arts creating more powerful products for the world. The AR/VR experiences are enjoyable through App Saas, White Labels, WebAR, Vurtual Tours. Awarded with â€œHorizon 2020 Seal of Excellenceâ€ by the European Commission and with â€œErnst & Young Special Prize 2019â€.

Antoni Abad is based in Barcelona and has a degree in Art History from the University of Barcelona and a European Media Master from the Pompeu Fabra University. In 2006 he was awarded the Visual Arts National Prize of Catalonia and the Golden Nica Digital Communities of the Prix Ars Electronica in Linz, Austria.
From 2004 to 2014 Abad devoted his activity to undertaking the megafone.net online communication projects based on publications from smartphones done by various at-risk groups in Brazil, Canada, Colombia, Costa Rica, Mexico, Spain, Switzerland, United States, and the Algerian Sahara.
Since 2015 he implemented the blind.wiki project in Rome, Sydney, Berlin, Wroclaw, Valencia and Venice: A citizen network in which participants with visual loss use smartphones to publish geolocated audio recordings of their daily experiences in the city, collectively generating a sensory public cartography that can be enjoyed by both the own collective, and the rest of society.
Among other venues, his work has been presented in MNCARS, Madrid; ZKM, Karlsruhe; New Museum and PS1, New York; Hamburger Banhof, Berlin; MACBA, Barcelona; Centre d'Art Contemporaine, Geneva; Laboratorio de Arte Alameda, MÃ©xico City; Pinacoteca do Estado de SÃ£o Paulo, and at the following biennials: Lima 1999, Seville 2004 and 2008; Mercosul Porto Alegre 2009, Berlin 2016 and Venice 1999 and 2017.

Elena Bellantoni (1975) lives and works in Rome where she teaches Phenomenology of the Body at the Academy of Fine Arts. After graduating in Contemporary Art History, she studied in Paris and London, where in 2007 she obtained an MA in Visual Art at the WCA University of Arts London. In the same year she co-founded the Platform Translation Group project which investigates the concepts of language and translation in the visual arts. In 2008 she opened the non-profit 91mQ art project space in Berlin, in 2015 she co-founded Wunderbar Cultural Project. Subsequently, with numerous workshops in Italy and abroad, she deepens her experience in video and performing arts.
Her artistic research reflects on the concepts of identity and otherness through relational dynamics that use language and the body as instruments of interaction, ranging from video, photography, performance, drawing and installations.
Over the years she has participated in numerous artist residencies including: in 2019 at Beo_Project, Belgrade; in 2017 The Subtle Urgencies, with Adrian Paci, Fondazione Pistoletto - ArtHouse, Biella-Scutari, Italy/Albania; in 2016, Soma Mexico Residency, Mexico City and in 2009 As long as I'm walking residency with Francis AlÃ¿s and the critic CuauthÃ©moc Medina, curated by 98weeks Research Space, in Beirut.
In 2018 with the project On the Breadline he is among the winners of the 4th edition of the Italian Council presented with a Focus at MAXXI in Rome in 2019. The project Ho drowned the Sea was selected in the Collateral Events section of Manifesta 12 in 2018; with the project In Other Words, the Black Market of Translation - Negotiating Contemporary Cultures 2011 won the NGBK (Neu Gesllschaft fÃ¼r Bildende Kunst) competition curated by Elena Agudio and Paz Guevara.
Other awards include the Repubblica.it Special Prize at the Talent Prize 2014 (2014), in 2009 Movin'up Worldwide of GAI (Young Italian Artists) by the Italian Presidency of the Council of Ministers; and in 2006 the first prize of the Tempelhof-SchÃ¶neberg Kunstpreis Zum Ball-Spiel in Berlin.
Elena Bellantoni's works are present in various public and private collections, including the Collection of the Ministry of Foreign Affairs La Farnesina, Istituto Centrale per la Grafica and the Pietro and Alberto Rossini Foundation. Her video works are also present in the Careof DOCVA Archive and the Italian Area Contemporary Archive curated by Viafarini in Milan.
In 2019 two monographs were published on her work Elena Bellantoni, an invisible match with the public edited by Cecilia Guida and published by Postmedia Books; Elena Bellantoni, On the breadline edited by Benedetta Carpi De Resmini and published by Quodlibet.
www.onthebreadline.it

RÃ¤ di Martino (Rome, 1975) studied in London where sheâ€™s graduated with an MFA at the Slade School of Art and after spending a few years in New York she moved back to Italy. Her practice explores the passage of time, as well as the discrepancies that differentiate epic narratives from lived experiences. Her works are characterized by a tension between pathos and a certain detachment: a disconnectedness that interrupts the synchronicity binding image and text. Her film, video installations and photos have been shown in many institutions, museums and film festivals including: Moma-PS1, NY; Tate Modern, London; NiMK Netherlands Media Arts, Amsterdam; MCA, Chicago; Palazzo Grassi, Venice; Artists Space, New York; Museion, Bozen; Magasin, Grenoble; the Busan Biennial; Manifesta; Turin Triennale, Torino International Film Festival, Kino der Kunst, Munich, Viper Basel and Transmediale Berlin. In 2014 and she presented her first medium length documentary The Show MAS Go On at the Venice International Film festival winning the Gillo Pontecorvo award and SIAE award and winning a nastro dâ€™argento for best docufilm. In 2018 her first feature film CONTROFIGURA, winner of the lâ€™Eurimages Lab Award was presented at the Venice Film festival and was nominated for the nastri dâ€™argento best docufilm. Nel 2018/2019 she wins the Mibac - Italian Council and developes the videoinstallation and a book of the project AFTERALL shown at Mattatorio/Palazzo delle esposizioni - Roma and at Kunstmuseum St. Gallen (2020).