Sailing on sea, on lakes, and rivers, is always a great pleasure, is a direct contact with the powers of nature, but nowadays, dipped in the unrelenting technology as we are, is becoming day after day more difficult to savour. Nonetheless the risk of falling into the water ruins this sensation, and could spoil a nice trip on a small sailboat, or on smaller, like a kayak, or bigger towable boats, where the contact with nature is at its most.

The inexpensiveness and the practicality of small sailboats widens enormously the audience of possible buyers, but the concern for a possible capsizing, and for the management of the sail, becomes an obstacle to the popular diffusion of yachting sailing.
It is a mechanical technology that has the purpose of enhancing the levels of security on a sailboat, specifically on those small or big boats, but without bulbous bow, without leaving out the use of a sail on closed kayaks and SUPs, and of an accessory that can keep the kayak dry even if capsized, both in sea, but especially in rivers.
Technology.
The device uses a mechanical technology, without any kind of electric or electronic backup, but relying only on cordage, elastic and rigid structures, and repellent clothes, or laminate combined with neoprene.
Innovative is the applicative concept and the assembly of the different pieces.
MARKET
The problem associated with providing a sail to small boats, while remaining in complete security, is a need widely spread all across the world.
Therefore, it concerns all the small and medium pleasure boats.
In particular, the device widens the possibility of using the sail on those boats traditionally used only with paddles, and on those boats lacking the bulbous bow, where the sail poses a great threat to security.
Nowadays the most developed country in this sector is North America, followed by Northern Europe, and Australia.
Whereas in closed kayaks navigation condition are way more severe, only recently solutions have been discovered.
These are methods that only work with full down wind. For other winds, they mostly use system that involve stabilizers, or expensive and cumbersome multi-hulls.
Therefore, this is a technology that could bring new popularity to sailboats, being able to be used by anyone.
Like:
Inexperienced of all ages,
People with disabilities, that will become able to sail as anyone else.
The prototype was developed to allow the simultaneous propulsion of the paddle and of the sail on any kind of kayak, with a small modification.
All of this is interesting for kayak-producing enterprises, and also other nautical means of transport, but also for a small enterprise that looks forward to specialising in the development of the device, under the form of a kit, with small investments, being the project already fully developed with the prototype.
The mechanism is quite simple, therefore particularly reliable, without molded parts, or electronic circuits of any kind, but particularly innovative.
All the elements that make the prototype desirable for production and commercialisation are present, all the elements needed for the successful transformation of the kayak in a sail-kayak and the application of the same technology on a SUP, and towable boats are present. And the absolute lack of competition whatsoever grants the absolute monopoly of the market on a worldwide level.
Thank you.
Italy
WEB 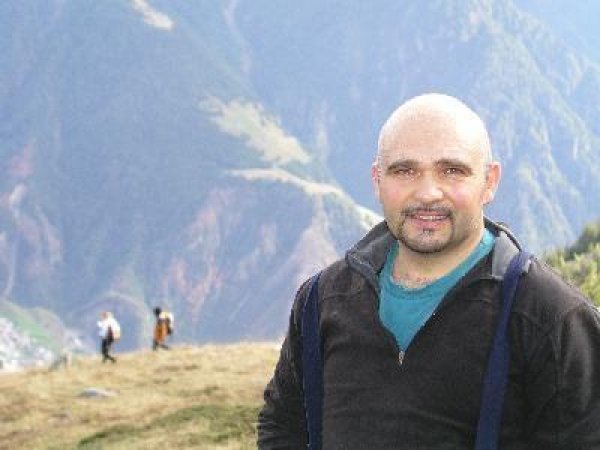 Personal Information
Giacomo Volponi
Place and time of birth : 26-02-1964 , Ancona
Residence : Via XX settembre 47 60030 Rosora (AN)
cell. +39.333.464.74.64
E-mail: giacomovolponi@libero.it
Education and training
Attained the license to practice the profession of naturalistic guide in the region Marche.
Attended the class of Sport Physiotherapy at Nice University in France.
University degree in rehabilitation therapy 90/90 cum laude
Attainment scientific high school diploma 36/60
Attainment of diploma in manual therapy directed by prof. Philippe E. Souchard at the Free University in Saint Mont (France)
Degree in acupuncture and collateral therapy of M.T.C. at Paracelso institute of Rome.
Attained the diploma in Eudinamica.
Attained the title of federal instructor for the Fikf ( Friends International Karate-Do Federation)
Attained license for the use of the defibrillator, and cardiopulmonary resuscitation manoeuvres.

Potholing course at the GSM, participating in the geological mapping of the Grotte di Frasassi complex.
Half-mountain skiing course, with the national instructor Franco Tossici
Lonely of the G.R 20 without topographic map , GPS or compass.
Guide on Monte Conero, on land and on sea.
Guide on Alpi della Luna (Ps)

Acquired skills.
Ability to solve problems where others stop, eclecticism, adaptability, ability to pursue an objective.
Knowledge of personal limits, professional and physics.
Ability to prevent, and manage, objective and subjective situations of danger, in hostile environments.