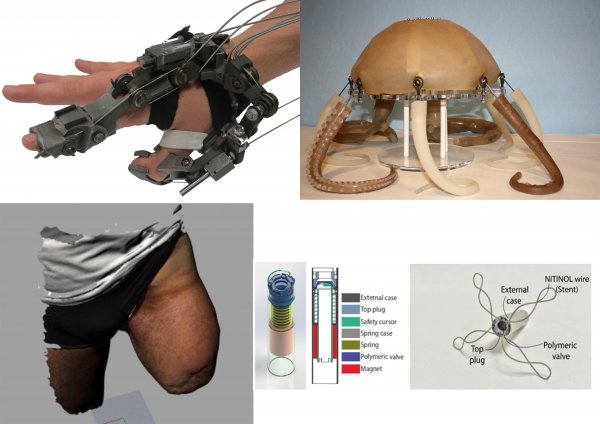 Wearable Robotics is a novel field of application for mechatronic devices. Robots are developed to help and improve the activity of the human user, allowing for new scenarios in rehabilitation, assistance and human augmentation.
The growing need for robots in service tasks, in unstructured environments, in contact with humans, is leading to release the basic assumption of rigid parts in robotics. Soft robotics is not just a new direction of technological development, but a novel approach to robotics.
Development of custom smart prosthetic socket, able to compensate the anatomical changes in shape and volume and based on materials enabling an optimal tissue stress distribution. Development of extra- and endo-urethral magnetically controlled sphincters featured by minimal invasiveness and suitable for males and females.

Nicola Vitiello (M12) received the MSc degree in biomedical engineering from the University of Pisa, Italy, in 2006, and from Scuola Superiore SantAnna (SSSA), Pisa, Italy, in 2007. He also received the PhD degree in Biorobotics from SSSA, in 2010. He is currently Associate Professor with The BioRobotics Institute, SSSA where he leads the Wearable Robotics Laboratory. He is the author or co-author of more than 50 ISI/Scopus papers and more than 30 peer-review conference proceedings papers and 17 patent applications. He has served as the Scientific Secretary of the EU FP7 CA-RoboCom project, and he was the scientific project coordinator of the EU FP7 CYBERLEGs project, the EARLYREHAB project funded by Regione Toscana, and the IUVO research project funded by a local bank Foundation, namely Fondazione Pisa. Currently he is the scientific project coordinator of the H2020-ICT-CYBERLEGs Plus Plus project, the national project MOTU funded by INAIL, and is partner of the H2020-ICT-AIDE and H2020-FoF-HUMAN projects. His interests include the development, experimental validation and maturation of novel wearable robotic devices for human movement assistance, rehabilitation and augmentation. He is a co-founder and shareholder of the spin-off company IUVO S.r.l.
Cecilia Laschi is Full Professor of Biorobotics at the BioRobotics Institute of the Scuola Superiore Sant'Anna in Pisa, Italy, where she serves as Rectorâ€™s delegate to Research. She graduated in Computer Science at the University of Pisa in 1993 and received the Ph.D. in Robotics from the University of Genoa in 1998. In 2001-2002 she was JSPS visiting researcher at Waseda University in Tokyo. Her research interests are in the field of biorobotics and she is currently working on soft robotics, exploring the use of soft materials for building robots, a young research area that she pioneered and contributed to develop at international level. She has been working in humanoid robotics and she worked in the first projects on neurorobotics, i.e. the use of robots for neuroscience research. She is now in the NeuroRobotics Platform of the Human Brain Project FET-Flagship. She is author/co-author of more than 200 papers, she serves as reviewer for many international scientific journals, including Nature and Science, for the European Commission, including the ERC programme, and for many national research agencies, in Europe and USA, and she has been working in numerous international projects. She is member of the National Bioengineering Group, of the IEEE, of the Engineering in Medicine and Biology Society, and of the Robotics & Automation Society, where she served as elected AdCom member and currently is Co-Chair of the TC on Soft Robotics. She is the General Chair of the First IEEE-RAS International Conference on Soft Robotics in Livorno (Italy), on April 24-28, 2018. She is founding member of RoboTech srl, spin-off company of the Scuola Superiore Santâ€™Anna, in the sector of edutainment robotics.
Arianna Menciassi is Full Professor of Biomedical Robotics at Scuola Superiore Santâ€™Anna (SSSA) and team leader of the â€œSurgical Robotics & Allied Technologiesâ€ Area at The BioRobotics Institute. She obtained the Master Degree in Physics (summa cum laude, 1995) at the Pisa University and the PhD in Bioengineering at SSSA (1999). She was Visiting Professor at the Ecole Nationale Superieure de Mecaniques et des Microtechniques of Besancon (France), and at the ISIR Institute at the UniversitÃ© Pierre et Marie Curie, in Paris. She has a substantial devotion to training and education, both at SSSA and at the University of Pisa, having served as preceptor to 15 postdoctoral associates, 20 PhD students and ~ 50 graduate degree recipients. Her main research interests involve surgical robotics, biomedical robotics, microsystem technology and micromechatronics, with a special attention to the synergy between robot-assisted therapy and micro-nano-biotechnology-related solutions. She also focuses on magnetically-driven microrobots and microdevices, as well as on biomedical integrated platforms for magnetic navigation and ultrasound-based treatments. She carries on an important activity of scientific management of several projects European and extra-European, thus implying many collaborations abroad and an intense research activity. She is co-author of more than 370 scientific publications and 7 book chapters on biomedical robots/devices and microtechnology. She is co-Editor of a book on piezoelectric nanomaterials for biomedical applications. She is also inventor of 25 patents, national and international. She served until August 2013 in the Editorial Board of the IEEE-ASME Trans. on Mechatronics and she is now Topic Editor in Medical Robotics of the International Journal of Advanced Robotic Systems; she is Co-Chair of the IEEE Technical Committee on Surgical Robotics, she is in the Steering Committee of the Society for Medical Innovation and Technology and in the Steering Committee of the IEEE Transactions on Nanobioscience. In the year 2007, she received the Well-tech Award (Milan, Italy) for her researches on endoscopic capsules, and she was awarded by the Tuscany Region with the Gonfalone Dâ€™Argento, as one of the best 10 young talents of the region.