In the first case, the goal is to use the body to guide the robot, and wearable devices must be worn to that aim. In the second case, the focus is on the physical interaction and the ability of the robot to generate empathy in the person it is interacting with. Finally, in the third case, the idea is to understand how an intuitive interaction is possible and aimed at achieving a particular objective (for example, the assembly of a semi-finished product).
Italy 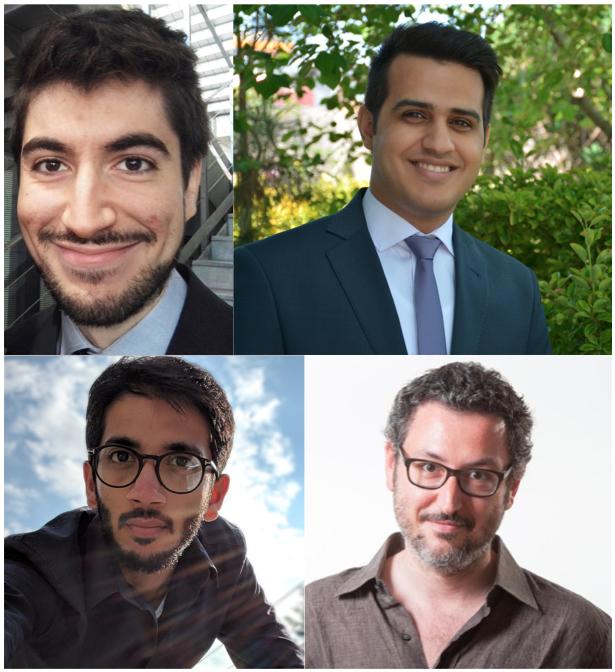 Alessandro CarfÃ¬ is a Ph.D. student at the University of Genoa, Italy. Alessandro received a double Master degree in â€œRobotics Engineeringâ€ and â€œControl and Roboticsâ€ respectively from the University of Genoa and Ecole Centrale de Nantes, France, in 2016, within the European Master on Advanced Robotics Plus programme (EMARO+). In 2016, he has been for six months "Visiting Student" at the Japan Advanced Institute of Science and Technology. His research interests are in social robotics, human-robot interaction, and human activity recognition.

Kourosh Darvish is a 3rd year Ph.D. student of Bioengineering & Robotics at the University of Genoa, Italy. He received B.Sc. and M.Sc. degrees in Aerospace Engineering from K.N. Toosi University of Technology and Sharif University of Technology, Iran. His Ph.D. project is about human-robot cooperation for smart factories. His research interests include robotics and human-robot interaction, and specifically artificial intelligence, machine learning, control theory, and path planning. Kourosh has published several papers in international journals, peer-reviewed international conferences, and workshops.

Fulvio Mastrogiovanni is Assistant Professor at University of Genoa, Italy, and Affiliate Associate Professor at the Centre for Intelligent Robotics, Japan Advanced Institute of Science and Technology, Japan. He is a co-founder and Chief Technical Officer of the start-up company Teseo srl. Fulvio received the M.Eng. and the Ph.D. in Robotics from the University of Genoa in 2003 and 2008, respectively. Fulvio has been Visiting Professor at the Asian Institute of Technology, Thailand, Jiao Tong University, China, Karlsruhe Institute of Technology, Germany, and Keio University, Japan. He was â€œManagement Coordinatorâ€ for the FP7 project ROBOSKIN, â€œTechnical Coordinatorâ€ for the Italian SHELL project, and PI in other national and EC-funded projects. Fulvio served as EU Program Chair for IEEE RO-MAN 2013 and IEEE RO-MAN 2015, EU Program Chair for DARS 2014 and EU Program Chair for URAI 2014, Industry/Exhibitions co-Chair for IEEE/RSJ IROS 2016, Workshops/Tutorials co-Chair for IEEE RO-MAN 2016 and 2017, and for ERF 2017. Fulvio will serve as Program co-Chair for IEEE RO-MAN 2018. Fulvio is Senior Editor of Intelligent Service Robotics (Springer) and Editor of Robotics and Autonomous Systems (Elsevier). Fulvio has published more than 100 papers in international journals and peer-reviewed international conferences and one edited book. He is part of the Board of Directors of the Italian Association for Artificial Intelligence, and member of the Admission and Review Board of the Digital Tree AI start-up incubator in Genoa, Italy. His research interests are in Artificial Intelligence techniques for Robotics and human-robot interaction. Fulvio received three Best Paper Awards in international conferences.

Syed Yusha Kareem is a first-year Ph.D. student in the Department of Informatics, Bioengineering, Robotics, and Systems Engineering at the University of Genova (UniGe). Yusha received a double Master degree in Robotics Engineering from the University of Genoa and Ecole Centrale de Nantes in 2017, within the European Master on Advanced Robotics Plus (EMARO+) programme. He has been working on the design and development of a scalable and robust human activity recognition system: Arianna+, which would provide in-home health care services specialized for elderly individuals. His research interests include the development of a modular activity recognition and decision making (planning and scheduling) system, that can make an environment (e.g., hospital, office or warehouse) artificially-intelligent and able to provide context-aware services for humans and robots. To this end, currently, he is exploring the possibility to combine logical (or relational) AI and probabilistic (or statistical) AI.
#Education #Fashion & Wearables #Internet of Things #Robotics #Wellness & Healthcare
G4 (pav. 5) - UNIVERSITA' DEGLI STUDI DI GENOVA
2018
Back
Data updated on 2021-11-09 - 11.51.35 am