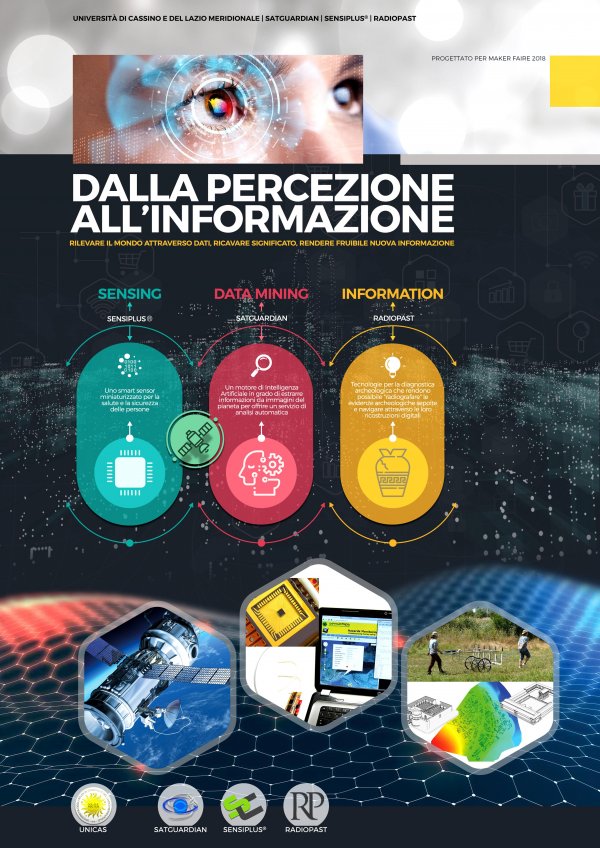 Every day, all around the world, about 2.5 billion billion bytes of data are produced, according to estimates approximate by default. The digital era has therefore led to such an abundance of "raw" data to generate serious difficulties in extracting information really useful to end users.
The University of Cassino presents a project in which mining and Artificial Intelligence (AI) techniques are implemented to make data from remote (satellite) and near sensors (such as IoT sensor networks) available in many different contexts of the smart society. Three examples of applications will be shown (SatGuardian, SENSIPLUS®, RadioPast) to support utilities, local administrations and archaeological research.
Italy
WEB

CRISTINA CORSI, at present associate professor in Archaeology at the Department of Humanities of the University of Cassino in Italy, is Marie Curie fellow (Senior Researcher), and associated member at the LA3M, Maison méditerranéenne des sciences de l'homme in Aix-en-Provence (France).
From 2007 to 2013 she was Visiting Director of Research at the Portuguese University of Évora.
She got her master degree in Archaeology at the University "La Sapienza" of Rome and the doctorate in Archaeology (Topography) at the University of Bologna. In 2002 she achieved the Diploma of the National Specialisation School in Archaeology at the University "La Sapienza" of Rome, and got several post-doc fellowships.
She coordinated the European project shortnamed “Radio-Past”, and the “Ammaia project” (Portuguese National Fund for Research).
She participated in large international projects such as the G.D.R.E. (CNRS, France), and INTERREG III – RITECA2 (Spain and Portugal).
Her main research interests are: Mediterranean Landscape Archaeology in the long-durée, Roman and Medieval Archaeology, specifically communication networks in Antiquity and the Middle Ages. She is internationally acknowledged as specialist in Archaeological Diagnostics.
She directed surveys and excavations in central Italy, in the Roman towns of Mariana (Corsica, France) and Ammaia (Portugal).
She authored two volumes about road networks and infrastructures in Roman Italy and in Medieval Latium, and a volume with the presentation of archaeological excavations at the Roman town of Ammaia. She edited and co-edited proceedings of important international congresses, the volume presenting the survey of Ammaia and a book devoted to guidelines in ‘Good Practice in Archaeological Diagnostics’. She authored and co-authored more than 70 papers in international journals and peer-reviewed proceedings volumes.

CIRO D'ELIA was born in Naples on November 26, 1971. He graduated in December 1998 with honors in Telecommunications Engineering at the University of Naples Federico II. In May 2001 he was the winner of a competition for one position as university researcher for the scientific disciplinary sector ING-INF / 03 at the Faculty of Engineering of the University of Cassino, where he is currently teaching. In March 2002 he obtained the PhD title by presenting the final dissertation entitled "Compression of Multispectral Images by segmentation". His research activity is mainly focused on the compression and analysis of images and video streams, and on modeling the characteristics of NGN networks for performance and safety management, and in recent years also in the IoT world. Ciro D'Elia, from 2002 to date, is the scientific director of the IT and telecommunications "LIT" laboratory. He was also scientific coordinator of several projects carried out with industries and research centers. He has been a tutor of about 15 research fellows on activities ranging from data mining to site safety analysis, to network security up to IoT. In recent years he has established international research relationships with research institutions and companies on topics ranging from the extraction of contents from optical data, to the analysis of network security to the analysis of SAR data contents, including DLR German Aerospace Agency, Metasensing Netherlands, Above Security Canada, VicomTech Spain.

MARIO MOLINARA received a Msc degree in Computer Science from University of Sannio in 1999 and a Ph.D Degree in “Computer Science and Telecommunication” from University of Salerno in 2003.
In 2004 he joined the Department of Electrical and Information Engineering (DIEI), where is now an Assistant Professor in Computer Science and Artificial Intelligence at University of Cassino and Southern Lazio.
He is member of the International Association for Pattern Recognition (Italian Chapter CVPR - "Computer Vision, Pattern Recognition"), has authored over fifty research papers in International Journals and Conference Proceedings and he is a member of IEEE.
His current research interests include image analysis and interpretation, classification techniques, statistical learning, biomedical imaging, neural networks, optical character recognition, map and document processing, intelligent measurement systems, smart sensors, IoT applications, time series classification and regression, deep learning techniques.