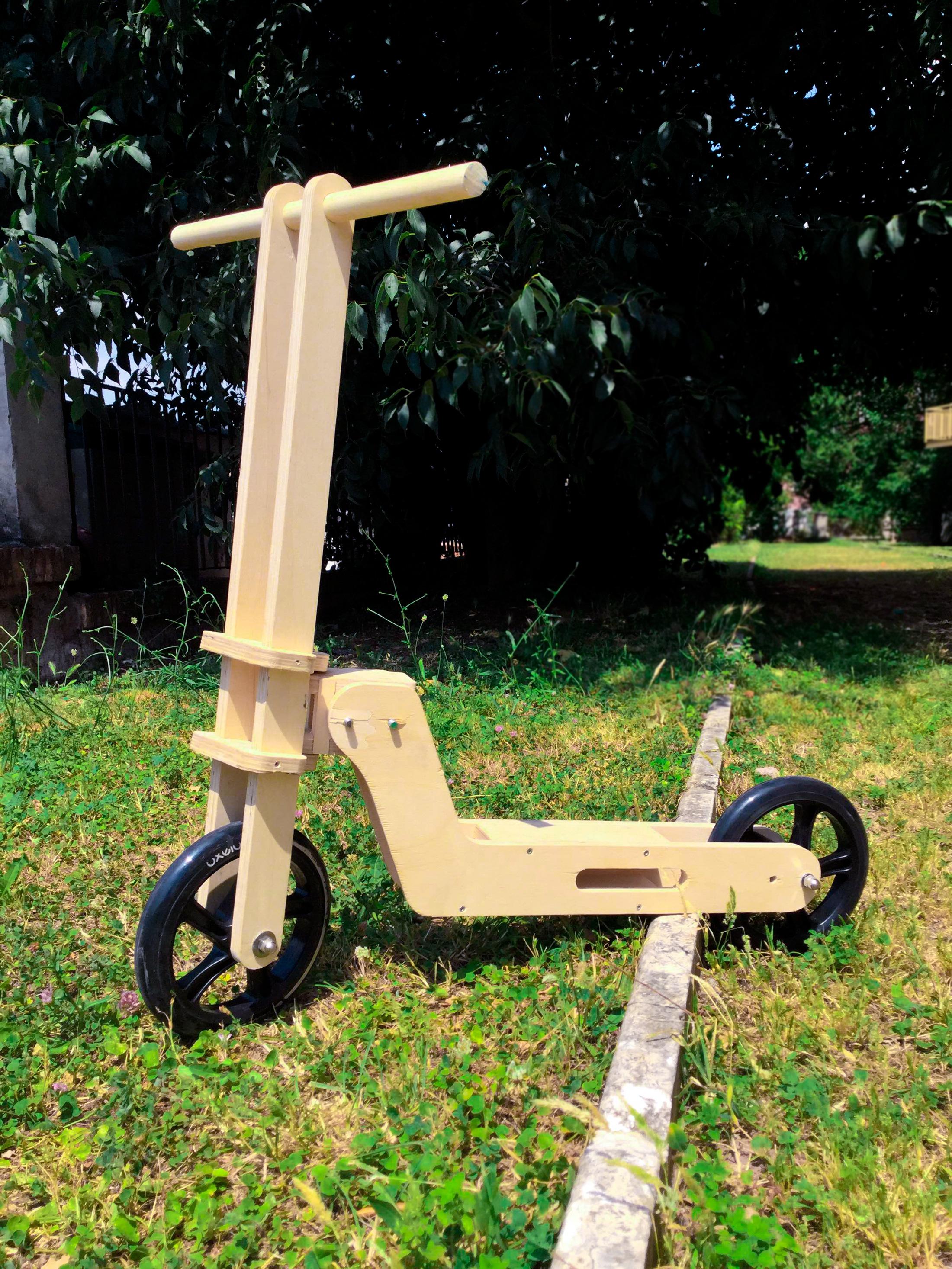 A real exercise of design, this project is based on the transformation of a simple wood board into a finish product, dynamic and functional. A â€œtwo in oneâ€ object that you can use and modify several times, according to your needs: bike with no pedals for kids who are making their first steps or kick scooter for those who walk already.
Everything starts from a handy and compact packaging, shaped as a small suitcase, with minima components. This packaging has simple and playful forms that can attract and captivate children.
After all, everything is designed for them. The kit is completely made of wood, realised with the CNC milling machine and you will need just a few moves and some simple tools to obtain the final object. Children will have really the impression to have built their bike/kick scooter with their own hands, in a recreational but also pedagogic process that marks the entire project.

Because of the success of this first model, the kit will be developed in different versions, such as the XL one for adults or the tricycle.

Project MADE IN FABLAB realised in the Innovation Gym, Rome.
Italy
TWITTER 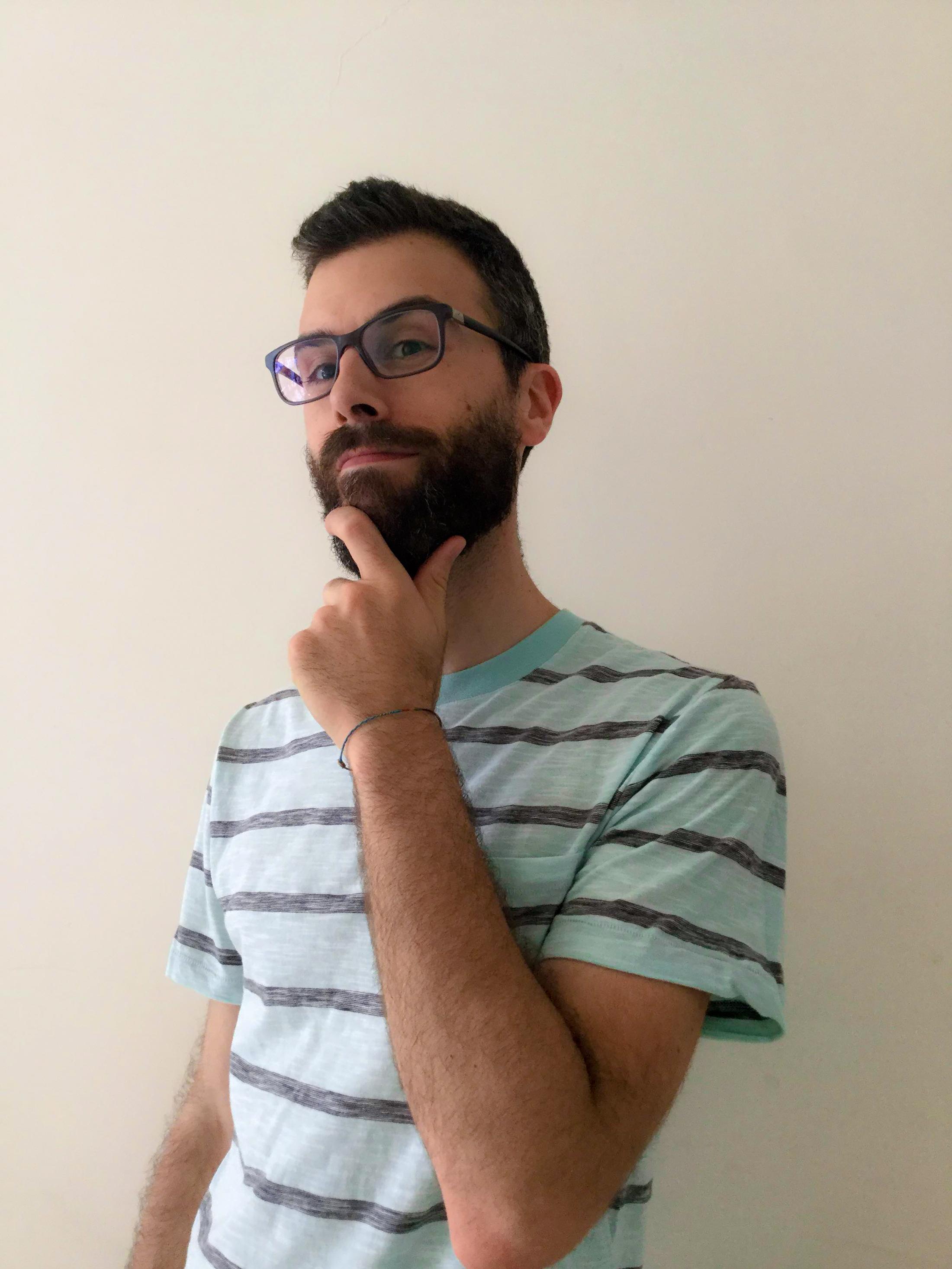 Francesco Murru is born in Lâ€™Aquila in 1981 where he attends the Technical and Industrial High School A. dâ€™Aosta.
Passionate by drawing and design, he moves to Rome to attend the Quasar Design University. Here, in 2005, he obtains the Diploma summa cum laude â€œHabitat Design: interior and gardens designer drawer and Industrial designâ€.
In the same year, he participates in the workshop â€œHomeless a living boxâ€, a collaboration of Design School of Okinawa, Quasar Design University and SKA (packaging division of Lucca) with the patronage of city of Rome and A.T.A.C. ROMA.
He also works for a requalification project of a big traffic circle in Ostia, promoted by Quasar Design University, the XIII Municipality of Rome, city of Ostia and the Rosa Garden.
He exposes â€œBicchiere per Ferrarelleâ€ (glass for Ferrarelle) during the Roma d+ faire, taking care of design and prototyping.
In 2009, he takes part in â€œLâ€™Aquila 3dâ€, a project directed by architect Barnaby Gunning with the sponsorship of Google, that wants to virtually reproduce on Google Earth platform the entire city after the big earthquake. For this initiative, he realizes the photographic survey and the buildings modelling with the software Google Building Maker and Sketchup http://barnabygunning.com/comefacciamo/.
He then collaborates as 3d designer at the workshop presented by Andrew Queen and Derivative titled â€œAmbienti Interattivi: Touch Design 077â€ (Interactive Environments: Touch Design 077).
In 2014, with Marco Dâ€™Alia, he presents the project â€œ3dRacers â€“ 3d printed real gameâ€. He is responsible for the product design and graphics, and develops original models of jeep and corvette. â€œ3dRacersâ€ has been launched on Indiegogo and since then it is a commercialised toy.
He also publishes an artistic work on the revue supplement Nero Magazine, Issue 34, called â€œLo Zioâ€, painting and burning on wood.

At the same time, as an expert of 3d modelling and digital painting, he works with different Architects and Designers to develop tridimensional modelling.
He is an active member of the Fablab Innovation Gym where he can realize many projects using common areas and equipment.
#Artisans & New Craft #Fabrication #Kids & Education #Wellness & Healthcare #Young Makers (< 18)
A15 (pav. 5) - Francesco Murru
2016
Back Data updated on 2022-09-26 - 11.49.12 pm