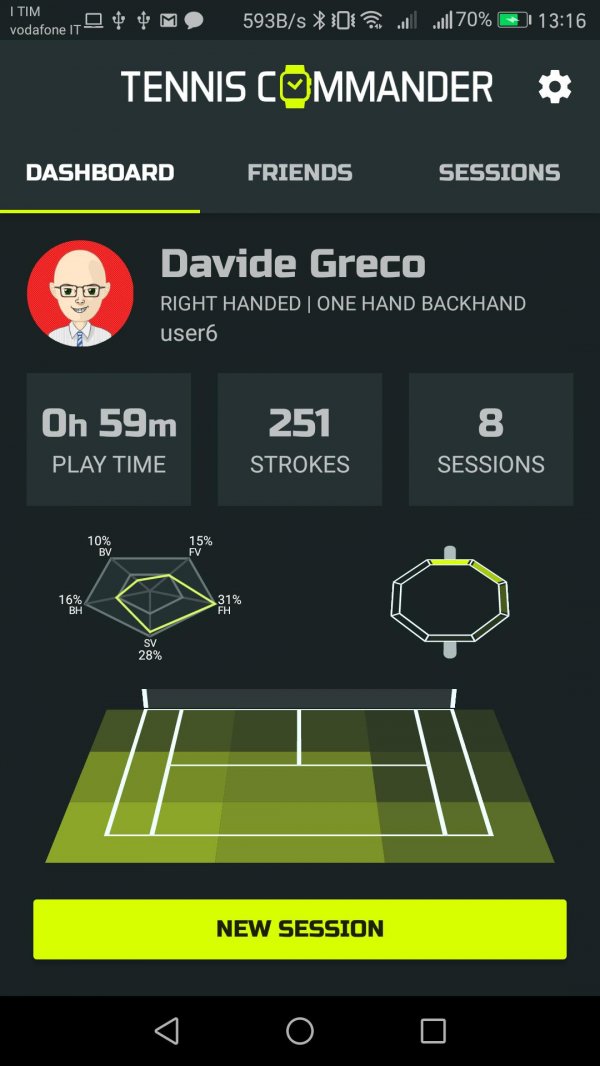 Introducing Tennis Commander, the first software for smartwatch to monitor performance of tennis players.
The movements and technical gestures of the player are monitored by a smartwatch weared during the playing session, and the collected data processed in real-time, providing a real “strategic support” to the player, one of the distinctive features of TC.
Strategic support are particularly effective also thanks to another great innovation of TC: the heatmap of the positions of the player on the court during the game, in real-time.
Italy
WEB FACEBOOK 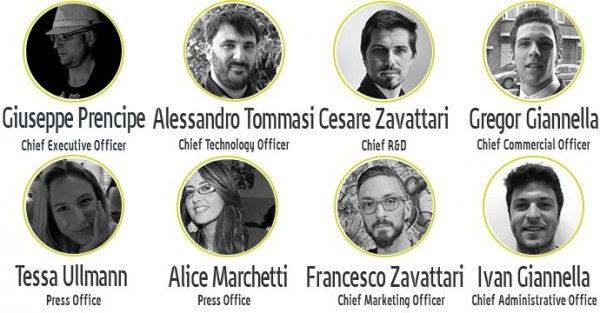 Giuseppe Prencipe: is currently Associate Professor at the Department of Computer Science at the University of Pisa. His research interests are mainly on distributed systems, mobile and wearable computing; he has published more than 50 scientific publications on international journals and conference proceedings, and participated in several national and international research projects. He also contributed to the design and development of software solutions dedicated to environments populated by mobile robots, and developed several mobile applications on Android, Android Wear and iOS platforms.

Alessandro Tommasi graduated magna cum laude in 1999 at the Department of Computer Science of the University of Pisa. He stayed there as a researcher until 2002, working on Question Answering, Knowledge Representation, Artificial Intelligence and NLP. In 2002 he joined the Consorzio Pisa Ricerche; from 2004 to 2010 he was part of R&D at Metaware S.p.A, managing EU funded projects. Specializing in Data Analysis and Business Intelligence, he also performed consultant work for Infocamere. In 2011 he founded Comprendo S.r.l, a company active on machine-learning based text analytics. From 2011 to 2013 he worked in Crowd Engineering’s Knowledge Management area, on BigData tasks. From 2013 to the present he is active in Lucense on data analysis projects related to Industry 4.0. He is an active consultant on themes concerning Machine Learning, artificial intelligence, data analysis.

Cesare Zavattari, Master Degree cum laude in Computer Science, University of Pisa in 2001.
Natural Language Processing, Artificial Intelligence and Machine Learning expert, Cesare
works in the text analytics sector since late 90s.
In these years he carried on applied research in industrial scenarios, developing systems to
perform information extraction, automatic classification, sentiment analysis and semantic
analysis for prominent editorial groups, telco and ICT companies worldwide.
Since 2002 he has been project manager for several projects, both national (italian) and EU.
Cesare is co-inventor of a semantic workflow system patented in USA, EU and China.
In 2010 he co-founded Comprendo S.r.l., a startup company devoted to text analytics.
Since 2011 he is R&D Leader for ICT projects in LUCENSE SCaRL, an italian research
organization, mainly focused on Industry 4.0.
He is an active consultant on themes concerning machine learning, artificial intelligence and BigData analysis.

Francesco Zavattari: born in 1983, he is consultant and marketing manager for many important companies in various fields. His professional artistic career started in 2002 and boasts dozens of personal Italian and international exhibitions and more than 250 official publications dedicated to this activity up to now. From 2008 he is executive director of Studio Matitanera®, dedicated to the research and development in graphics, marketing, communication, design, investigation on colours and much more. He is founder and main designer of the Made in Italy notebook's product line 'Noteblack®' and head editor of FULL Magazine and '4rum.it'.

Alice Marchetti: Graduated in modern foreign languages and literatures, she is currently a CTER (Technical Collaborator for Research Bodies) at the Institute of Informatics and Telematics of the CNR of Pisa. She is in charge of translations, text revisions and technical assistance for the Italian Domain Names Registry. She has gained experience in the PR and marketing sector in a music promotion agency in Milan. She is co-author of a collective novel also presented at the international festival of Turin book in 2015. She is a Graphologist and PNL practitioner.

Gregor Giannella: Aston Business School (UK) graduate in BSc Business & Management with focus on international management and marketing; University of Surrey (UK) post-graduate in MSc Sustainable Development; currently enrolled in an MSc in Innovation and Entrepreneurship held by the Politecnico di Milano Graduate School of Business (IT) and Solvay Brussels School of Economics and Management (BE).
Native Italian, speaks fluently English, Spanish and French with a good knowledge of Portuguese.
Winner of the "Entrepreneurship School 2014" held in Brussels and participant at the "European Innovation Academy 2016" held in Turin, Europe's largest tech-startup accelerator programme.

Tessa Ullmann graduated from McGill University (Canada) with a BA in Anthropology and Biology and is currently completing a Master of Science in Conservation Biology at the University of Kent in the UK. Tessa was formerly based in Washington DC where she worked as a research analyst for an international NGO dedicated to wildlife crime investigation. She was previously an investigator for a private international firm for three years conducting corporate due diligence. She has noteworthy experience in public outreach, investor and client relations, and has held numerous communications roles for major international organizations. She has experience designing and implementing marketing and campaign strategies. Tessa has also occasionally interpreted in English, Italian and French-languages.
#Fashion & Wearables #Wellness & Healthcare
E19 (pav. 6) - Tennis Commander
2017
Back
Data updated on 2020-12-13 - 11.41.04 pm