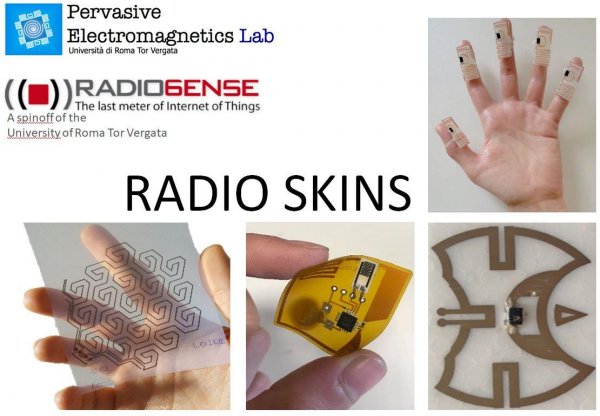 Epidermal technology for the realization of bio-integrated radio-membranes acting as SECOND SKIN equipped with batteryless wireless sensors and remotely interrogated by fixed and wearable systems with local processing capacity.
The new technology will be useful for the gathering of specific biophysical parameters of the skin such as temperature, sweat, pH, but also to recover and expand human sense like the estimation of the temperature and the composition of touched object.

Gaetano Marrocco: Electronic Engineering and Ph.D. degrees in Applied Electromagnetics from the University of L'Aquila, Italy, in 1994 and 1998, respectively. Researcher at the University of Roma Tor Vergata in 1994-2014. Associate Professor of Electromagnetics in 2013-2017. Guest Professor at the University of Paris-est Marne la VallÃ¨e in 2015 and Full Professor at the University of Roma Tor Vergata since 2018. He currently serves as Director of the Medical Engineering School.
His research is mainly directed to the modelling and design of broadband and ultra-wideband (UWB) antennas and arrays as well as of sensor-oriented miniaturized antennas for Biomedical Engineering, Aeronautics and Radiofrequency Identification (RFID). During the last decade, he carried out pioneering research on the wireless-activated sensors, and in particular on Epidermal Electronics, contributing to move from the labeling of objects to the passive sensor networks in the Internet of Things era. He serves as Associate Editor of the IEEE Journal of Radiofrequency Identification and was member of the IEEE Antennas and Propagation Society Awards committee. He is moreover Chair of the Italian delegation URSI Commission D Electronics and Photonics. He was the chair of the Local Committee of the V European Conference on Antennas and Propagation (EUCAP-2011), TPC chair of the 2012 IEEE-RFID TA in Nice, France, TPC track-chair of the 2016 IEEE Antennas and Propagation Int. Symposium, TPC track-chair of IEEE-RFID 2018 USA.
Prof. Marrocco is the director of the Pervasive Electromagnetics Lab and the co-founder and president of the University spin-off RADIO6ENSE (www.radio6ense.com) active in the short-range electromagnetic sensing for Industrial Internet of Things, Smart Manufacturing, Automotive and Physical Security.

Cecilia Occhiuzzi received the M.Sc. degree in medical engineering and Ph.D. degree in electromagnetics from the University of Rome â€œTor Vergata,â€ Rome, Italy, in 2008 and 2011, respectively.
Currently, she is Assistant Professor with the University of Rome â€œTor Vergataâ€, where she teaches Electromagnetic Fields. In 2008, she was with the School of Engineering, University of Warwick, Coventary, U.K. as a post-graduate student, in 2010, she was a Visiting Researcher with the Georgia Institute of Technology, Atlanta, GA, USA and in 2014 she was a Research Assistant with the University of Palermo, Italy. She is the Co-Founder and CEO of RADIO6ENSE. Her research interests include wireless health monitoring by means of wearable and implantable radio-frequency/mm-wave identification techniques and pervasive sensing paradigms for Industry 4.0.
Dr. Occhiuzzi was the recipient of the IEEE APS Doctoral Award, in 2011. In 2012, she was the recipient of the Best Thesis Award at the 2012 RFID Journal Live, Orlando, FL, USA. She is author of more than sixty papers on International Journals and Conferences.

Sara Amendola received her M.Sc. with honors in Medical Engineering from the University of Rome â€œTor Vergataâ€ in 2013. In autumn 2013, she joined the â€œTampere University of Technologyâ€ in Finland as Visiting Researcher, working on the mm-size implantable antennas for Brainâ€“Machine Interface Microelectronic Systems. In December 2015 she was at the ESIEE Paris to investigate microfabrication technologies for epidermal radio-sensors. In May 2017, she achieved the PhD in Computer Science, Robotics and Electromagnetics with distinction at the University of Rome â€œTor Vergata", discussing a thesis on Wireless and Battery-less Bio-integrated Sensors for Bodycentric Internet of Things. She is co-founder of the University spin-off RADIO6ENSE, actively involved in the design and development of RFID Sensing and Identification Platforms for Personal Healthcare and Industry 4.0.

Simone Nappi received the M.Sc. degree in Electronic Engineering from the University of Rome â€œTor Vergata,â€ Rome, Italy, in 2017, where he is currently pursuing the Ph.D. degree in Computer Science, Control and Geoinformation.
His research interests include the development of RFID sensors for monitoring the early aging signs in polymer and metal objects to enable a predictive maintenance and a non-invasive diagnosis procedure.

Carolina Miozzi received the M. Sc. degree in Medical Engineering from the University of Rome â€œTor Vergataâ€, in 2017, where she is currently pursuing the Ph. D. in Electronics Engineering. Her research interests include on-skin antennas and through-the-body wireless communication systems for smart health monitoring and detection of biophysical parameters. In particular, she is currently working on the development of a wireless power transfer and transcutaneous telemetry system for the control of robotic limb prostheses, using EMG-sensors implanted subcutaneously.

Francesca Camera received the Master degree in biomedical engineering and the Doctorate degree in electronic engineering from Sapienza University of Rome, Roma, Italy, in 2012 and 2016, respectively. The topic of her thesis was about the electrical and magnetic stimulation of the central nervous system and included the study of the interaction of electric fields with neuronal mathematical models. Between 2016 and 2019 she worked as a Development & Testing Engineer for innovative detection technologies of ionizing radiation in scintigraphic applications, in collaboration with the Department of Molecular Medicine of Sapienza University of Rome.
From April 2019 she is a Post-Doctoral Researcher with the Tor Vergata University at the Pervasive Electromagnetic Lab, Roma. Her research interests include the development of algorithm/query procedure and data processing for epidermal electronics.

Francesco Amato received the B.S. and M.S. degrees in Telecommunication Engineering from the University of Roma Tor Vergata in 2006 and 2009, respectively, and the Ph.D. degree in Electrical and Computer Engineering from the Georgia Institute of Technology, Atlanta (USA), in 2017.
From 2009 to 2011, he was with SES, Luxembourg, as a Ground System Engineer. In 2012, he joined the Propagation Group, Georgia Institute of Technology, as a Research Scholar and was a Research Intern with Intel Labs, Santa Clara, CA, in 2015. Between 2017 and 2018 he was a Post-Doctoral researcher with the Santâ€™Anna School of Advanced Studies at the Digital and Microwave Photonics Group, in Pisa. He is currently a Post-Doctoral Researcher with the Tor Vergata University at the Pervasive Electromagnetic Lab, Roma.
Francesco was a mentor for the Opportunity Research Scholars Program at the Georgia Institute of Technology. He received, among others, the Master Thesis Prize Sebastiano e Rita Raeli in 2009; the Fulbright Scholarship in 2012; the GoSTEM Fellowships in 2013 and 2014; the Best Student Paper Award of the IEEE International Conference on RFID-Technologies and Applications (RFID-TA) in 2015 during his Ph.D studies; the William Brown Fellowship in 2015; the best paper award at the IEEE International Conference on RFID and the Clive Hohberger Technology Award in 2019.
His research interests include, long-range backscatter radio communications, microwave and mm-wave frequencies for 5G communications, and epidermal electronics.

Giulio Maria Bianco Biomedical engineer graduated at the University of Rome Tor Vergata in 2018, currently a PhD student at the same University with the subject of electromagnetism for wearable devices. His activity, in addition to the research carried out in the Rome site, includes the participation in a European application project in collaboration with the European Academy (EURAC) of Bolzano.