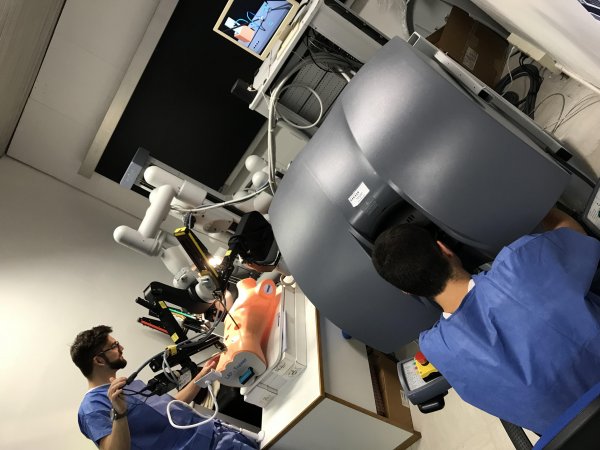 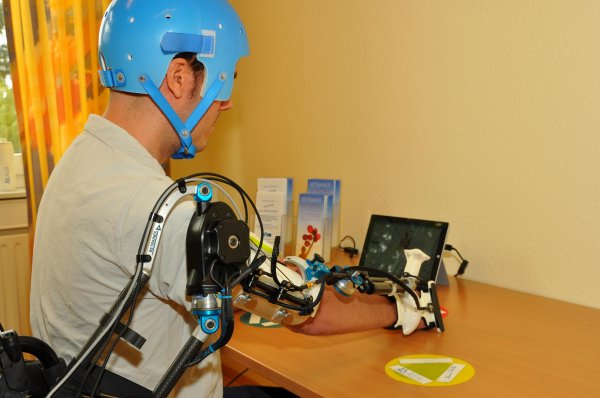 Nearlab (Neuroengineering and Medical Robotics Lab) is organized in two sections. The mission of NeuroEngineering Section (NES) is to develop methods & technologies to promote the life of people with neuromotor disorders. To this, we adopt two complementary approaches, developing rehabilitation technologies able to reach patients in medium term, and tools to investigate brain learning mechanisms. The mission of Medical Robotics Section (MRS) is to develop methods & technologies to promote the use of artificial intelligence and robotics in the medical domain. To this, we adopt complementary approaches, developing tools for scene understanding and human robot interaction optimization.
Italy
TWITTER

Giancarlo Ferrigno, IEEE Senior Member, MSc in Electronic Engineering in 1983, PhD in Bioengineering in 1990. After six years as senior researcher in a private foundation started his academic career at Politecnico di Milano University where he is today Full Professor in the Electronic Information and Bioengineering Department (DEIB) (Assistant Professor in 1990, Associate Professor in 1998 and Full Professor in 2001).
He chaired the PhD program in Bioengineering from 2001 to 2004. From 2004 to 2006 he was appointed director of the Politecnico di Milano PhD School. From 2007 to 2009 he directed the Bioengineering Department. From 2016 he is chair of Bioengineering division of the Department of Electronics, Information and Bioengineering. In 2008 he founded the Neuroengineering and Medical Robotics Laboratory. He organized and directed the one-year Master in Technologies for surgery in 2006. He has been responsible of grants from Italian Research Ministry, Industrial Companies, Italian Space Agency and European Commission. In the last years he has been the European Coordinator of three FP7 EU projects in the ICT topic: ROBOCAST (2008-10), ACTIVE (2011-15) and MUNDUS (2010-2013). Current active funding is as PI partner of two Horizon2020 projects in Surgical robotics (SMARTsurg) and DIH in Robotics for Healthcare (DIH HERO).

Emilia Ambrosini is Assistant Professor at Politecnico di Milano. She received her Master Degree com laude in Biomedical Engineering in 2007 and her PhD degree com laude in Bioengineering in 2011, both from Politecnico di Milano. In 2009, she spent 9 months at Berlin Technische Universitat Berlin (Prof T. Schauer), in order to develop control systems for neuroprosthesis. In 2013, she visited the Neuroplasticity & Neurorehabilitation Laboratory of the University of Birmingham (Dr. M.J. Grey), where she was focused on the development of novel methods based on Transcranial Megnetic Stimulation to evalutate cortical plasticity. Since 2011, she carried on her post-doc research activity at NearLab (Neuroengineering and Medical Robotics Laboratory, directed by Prof. G. Ferrigno) and she has been involved in several national (ricerca Finalizzata GR, project PRIN) and international projects (MUNDUS, EU-FP7 ICT; RETRAINER, H2020 IA ICT; MOVECARE, H2020 ICT; NIH Biofeedback for CP). Her research interests are the development of technologies for functional electrical stimulation and robotic systems for the rehabilitation and/or the daily life assistance of neurological patients, the development of advanced methods to quantitatively assess the effects of rehabilitative programs both in terms of functional gains and neural correlates, and the design and implementation of randomized controlled trials and systematic reviews to promote evidence-based approaches in rehabilitation. She is co-authors of 39 papers in international journals indexed in Scopus (H-index 14, July 2019).

Elena De Momi, MSc in Biomedical Engineering in 2002, PhD in Bioengineering in 2006, currently Associate Professor in the Electronic Information and Bioengineering Department (DEIB) of Politecnico di Milano. She is co-founder of the Neuroengineering and Medical Robotics Laboratory, in 2008, being responsible of the Medical Robotics section. IEEE Senior Member, she is currently Associate Editor of JMRR, of the IJARS, Frontiers in Robotics and AI and Medical & Biological Engineering & Computing. From 2016 she has been an Associated Editor of IEEE ICRA, IROS and BioRob, Area Chair of MICCAI and Publication Co-Chair of ICRA 2019. She has been evaluator and reviewer for the European Commission in FP6, FP7 and H2020. She is responsible for the lab course in Medical Robotics and of the course on Clinical Technology Assessment of the MSc degree in Biom. Eng. at Politecnico di Milano and she serves in the board committee of the PhD course in Bioengineering. Her academic interests include computer vision and image-processing, artificial intelligence, augmented reality and simulators, teleoperation, haptics, medical robotics, human robot interaction. She participated to several EU funded projects in the field of Surgical Robotics (ROBOCAST, ACTIVE and EuRoSurge, where she was PI for partner POLIMI). She is currently PI for POLIMI of the EDEN2020 project and of the ATLAS MSCA-ITN-2018-EJD, and coordinator of the MSCA-IF-2017 â€“ Individual Fellowships.

Simona Ferrante received the M.S. degree in biomedical engineering and the Ph.D. degree in bioegineering from the Politecnico di Milano, Milan, Italy, in 2002 and 2006, respectively. She is an Assistant Professor at the Electronics Information and Bioengineering Department,
Politecnico di Milano, where she teaches e-health methods and Progetto [Informazione] in the M.Sc. and B.Sc Bioengineering respectively. Her research activities are carried out at the Neuroengineering and Medical Robotics Laboratory (NearLab) in the field of neurorehabilitation and motor control. She is mainly focused on the development and validation of technologies for the rehabilitation or the assessment of neurological patients and fragile people.
She was the principal investigator of an Italian project funded by the Ministry of Health (GR-2010-2312228) and has been involved in several national and international projects (MUNDUS, EU-FP7 ICT; RETRAINER, H2020 IA ICT). At the moment she is the responsible of the research unit of Politecnico di Milano for a European project (Movecare, H2020-ICT-2016-1) and a national project (STRIVE, funded by the Ministry of Health GR-2016-02365049). She is co-authors of about 65 papers in international journals indexed in Scopus (H-index 18, July 2019).

Alessandra Pedrocchi received the M.S. degree in Electrical Engineering and the Ph.D. in Bioengineering from the Politecnico di Milano in 1997 and 2001, respectively. Sheâ€™s currently Associate Professor at the Department of Electronics, Informatics and Bioengineering of the Politecnico di Milano, where she teaches Neuroengineering in the MSc in Biomedical Engineering and Biomedical Instrumentation to undergraduates. She is one of the founders of Nearlab, the NeuroEngineering And medical Robotics laboratory, funded in 2008 at the POLIMI and she is currently responsible of the Neuroengineering section (www.nearlab.polimi.it). Alessandraâ€™s research interest is neuroengineering, including biomechanics in motor control, neurorobotics and new technologies for neurorehabilitation, with a special emphasis on upper limb exoskeletons for rehabilitation and assistive devices, neuroprostheses and the study of the correlation between brain plasticity and functional recovery. She has been coordinating various research projects funded by national private foundations (fnd Cariplo and Telethon), European projects (Horizon 2020 -RETRAINER, FP7- REALNET), NIH grant and a partnering project of the FET Flagship Human Brain Project (CerebNEST). She has been appointed as IEEE Senior Member since 2018 and she serves as Associate Editor of IEEE Transaction of Neural System and Rehabilitation.
#3D printing #Artificial Intelligence #Education #Fabrication #Robotics
C35 (pav. 9) - Politecnico di Milano - DEIB
2019
Back
Data updated on 2021-11-09 - 11.51.35 am