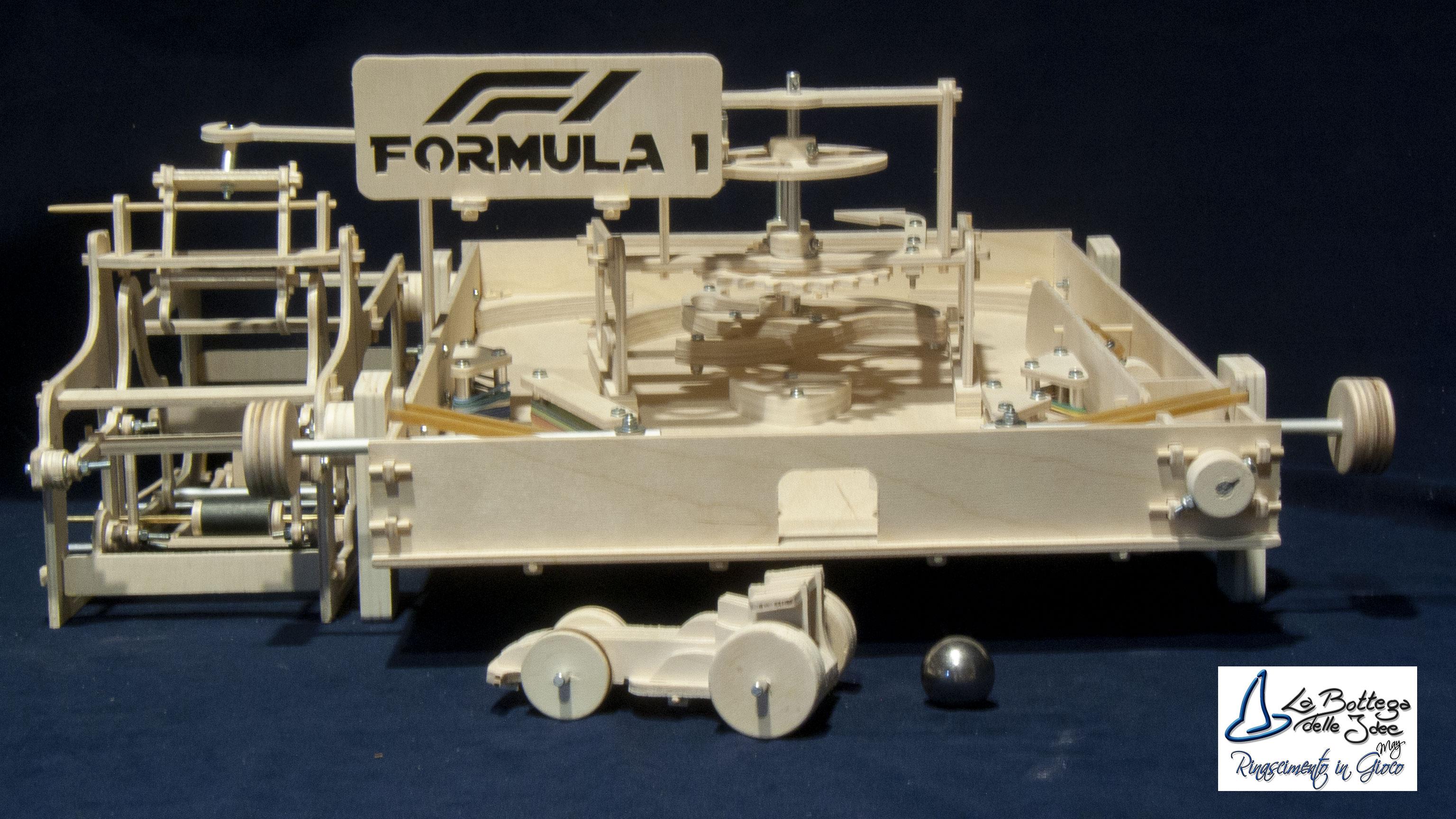 The Pinball "Formula 1" unlike my other achievements, has a reduced size 47 cm x 50 cm height 30 cm and is presented as a mounting box.
In the central part of the pinball machine there is an impeller inserted in a lane where the player, making it turn by throwing the steel ball, operates a reduction mechanism that has the task of rotating a pin which will operate, with a lever, the second mechanism.
The latter mechanism will make a counterweight fall on another lever which, once activated, will launch the car outside the pinball machine out of the starting grid.
In a game with more players, and therefore as many pinballs, who will launch the car first will have won the game.
The project is made of 4mm birch wood and can be assembled without glue.
It consists of about 203 pieces and 50 screws.

"Why does the eye see a thing more clearly in dreams than the imagination when awake?" Leonardo Da Vinci
It was a visit to the Leonardiano Museum in Vinci that inspired me to make my first prototypes. The genius of Leonardo allowed him to create incredible feats of engineering, all achieved without any of today's technology.
Leonardo's lantern gear was the inspiration behind the "The Elastic Machine F=kδ"
Several months after the trip to Vinci, I visited a Renaissance market where I saw a wooden pinball machine.  Although it was quite basic, the children playing with it were having a great time. I wondered whether Leonardo would have been able to make one, but it probably would never have occured to him as the  first pinball machine was invented in 1935 by the American company, Gottlieb.
I imagined what it would have been like to like in Leonardo's time, and thought about what sort of pinball machine he might have invented, using Leonardian gears and the rules of physics: levers, kinetic energy and gravity.  After many attempts, the 'Flipper 7° Quadrante' was born. After its succes, I decided to make another one, that was more 'medieval' than the first. As I live in a small Rennaisance village, which has it's own castle, I decided to use that as a model so the 'Flipper il Castello' took shape.
After this, I happened to spot a picture of St George and the Dragon, so my imagination led to to include a dragon in my next pinball machine. The "Flipper il Drago" works according to a system of levels, pulleys and weights, inspired by Leonardo's writings.
As well as being passionate about Leonardo's machines, I'm also interested in the Medieval period and a king and his loyal knights were the inspiration for 'La Catapulta' game.
Watching the film "The First Knight" aroused my fantasy and so I set to work on the construction of a new game "The Joust of 7" that slowly came to life like all the others!
The last work I did started from the idea that there were more players and then I made the pinball "The 4 Knights", a game where four players must join forces to get together to the same goal.
All my games are handmade and built with recycled wood, mainly pine and beech. Each piece that makes up the game, is crafted with care, and made in wood to make it more durable and able to withstand humidity, dust etc.
Each game must be treated with care, because, as the saying goes, 'wood lives until its burnt', almost as if it possesses a soul. To ensure that each game lives as long as possible, you have to treat it with respect.
As I'm an eternal dreamer, every time I see a project come to live, I imagine how much Leonardo himself would have enjoyed playing with it...and sometimes I hear him laughing next to me.