Terpsìphoné is an interactive floor that ampifies and elaborates the sound of movement made on it. The aim is to find a connection between movement and sound, switching it.
The sound doesn' t cause the movement, just like dance, but the movement itself becomes music.
Moving on the floor, the user establishes an interaction that, at the beginning, is like a game of creative exploration, but it becomes a conscious involvement, like the instrumentalist with his own instrument. The only difference is that in this case the instrumentalist is any man without specific musical technique and the instrument is his own body. 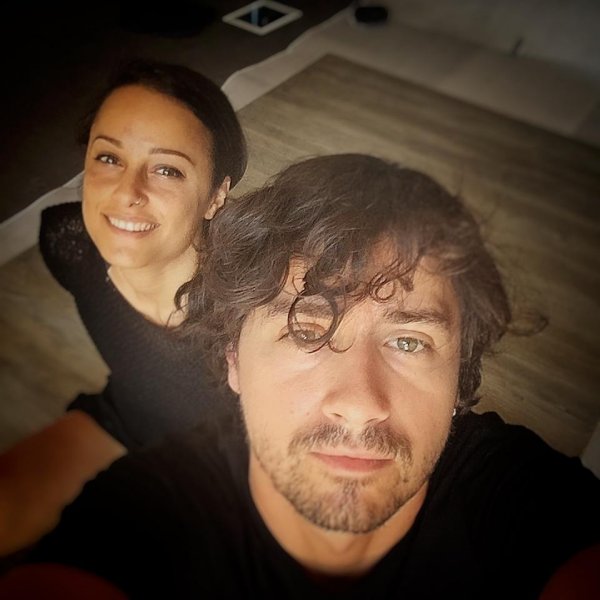 Concetta Cucchiarelli (1980, L’Aquila), composer, sound designer and interactive media designer. Graduated in Political Science at Luiss "G. Carli", master in Arts & Heritage management at Luiss "G. Carli". Graduated in Electronic music composition at the Conservatory "A. Casella" in L'Aquila with M. Michelangelo Lupone. Singer, dancer and performer, she focus her studies on the connection between sound and movement with interactivity.
She just registered and developed the method ETMA (Embodied Thinking in Performing Arts), who investigates the potentials of a technology driven educational model to dance and performing arts training in general as well as raising awareness of the importance of the body in common human interactions.
First prize in the contest for emerging artists under 35 in the Festival "I Cantieri dell'immaginario 2014" in L'Aquila with the project Terpsìphoné.
Composer for dance works: Possibilità (in)evitabili, for the choreographer Benedetta Capanna, commissioned by Accademia di Danza in Rome and CRM in Rome, Vapore Corporeo for Antonello Tudisco, In Chopin for Marco De Alteriis, commissioned by Balletto del Teatro di Torino, Barbablu for Francesca La Cava, commissioned by Ente concertistico Barattelli. As creator, composer, director and sound designer she realised her works for Terpsiphoné: T[h]ere (2013), Voci di Demetra (2014), Inn[h]er Voice (2015), Sinfonia per un uomo solo (2015).
She's teaching new technologies at the Second Level College of Science "T. Gullace" in Rome.
Since 2012 she's collaborating with CRM in Rome (Centro di Ricerche Musicali) as researcher and composer. She had documented and developped the scientific support for the educational method Sheer from the vocal coach Arianna Todero and the scientific support for a research project about spasmodic disphonia at La Sapienza University with the prof. Gianni Ruoppolo.
Musical assistant in the last three editions of Arte e Scienza in Rome and Musica Emozioni, research and trial program with U.O.C Phsychiatric at the Policlinico Tor Vergata.
Sound engineer for a stage in 2010 and 2011 at Casa del Jazz in Rome.


Stefano Di Pietro (1984, Roma) received his B.A. and M.A. with honours in Philosophy at Sapienza University of Rome and received his Phd in Philosophy of Language in June 2014 at the same University. He did extensive training and research in the United States from 2009 to 2012. He studied Linguistics and Cognitive Science with George Lakoff at UC Berkeley (CA, USA) and he has been affiliated to the Cognitive Science Department at UC San Diego (CA, USA). He has been teaching assistant and graduate student instructor for numerous courses is Sapienza University of Rome in the Department of Philosophy and Humanities. He published scientific as well as journalistic articles both in Italian and English on topics related to Cognitive Science, Aesthetics, Linguistics and Philosophy both in peer-review Journals, Books and Magazines. Along with academic experience he gained skills and knowledge in the field of Music and Composition starting the study of guitars at the age of 15 and later on piano and keyboards. At the age of 18 he started singing lessons both privately and in Music Schools. He featured as singer/songwriter in a number of music productions (Albums, Movies, TV series) both with his original compositions and cover version of songs from the anglo-american repertoire. His latest album “Monarch” (2015 - Limited/Suburban) with the Alternative Rock Band “Mad Shepherd” is co-produced by Walter Babbini (Zucchero, Morricone, Piovani) at Revolver Studios. Along with his musical and academic activity he is also a consultant for European Research Projects related to Music (H2020). From 2013 he is Degree Unit Leader for “Music in Context” in the Bachelor Degree in Contemporary Music Performance at “Sonus Factory - Music Performance Institute”. The course integrated in the Bacheleor Degree track is released by Chichester University (UK) and cover subjects related to Aesthetics, Philosophy of Music and Cognitive Science of Music. From 2015 he started collaborating with Concetta Cucchiarelli (Composer, Media Designer, Dancer) on a number of projects founding the collective “Metapherein” in which he has the role of Director and Music Composer and curating the cognitive and philosophical aspects of the artistic performances. A main focus of the collective is the work with an interactive floor named “Terpsìphoné” both in performances and education (for which they recently developed the method “Embodied thinking in Performing Arts®”. He recently worked on the music composition for the show Barbablu that will feature also Terpsìphoné and will premier in l’Aquila (Auditorium del Parco) after some presentations in Milan (DID), Turin (Lavanderia a Vapore) and others theatres around Italy. His work Inn(h)er Voice premiered at Conservatorio dell’Aquila and is expected to be performed soon around Italy starting autumn 2015.
#Architecture #Interaction #Art
P12 - Terpsìphoné: pavimento interattivo.
2015
Back
Data updated on 2021-10-19 - 4.19.56 pm