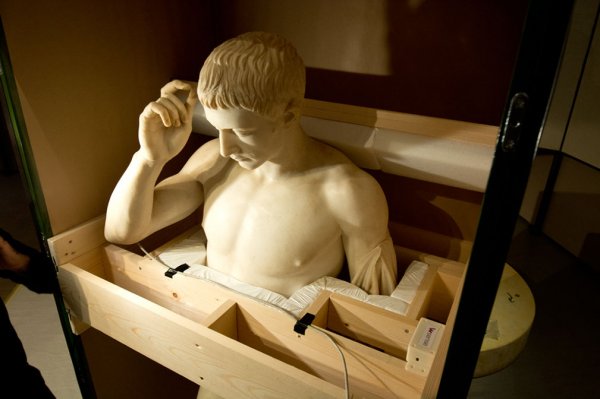 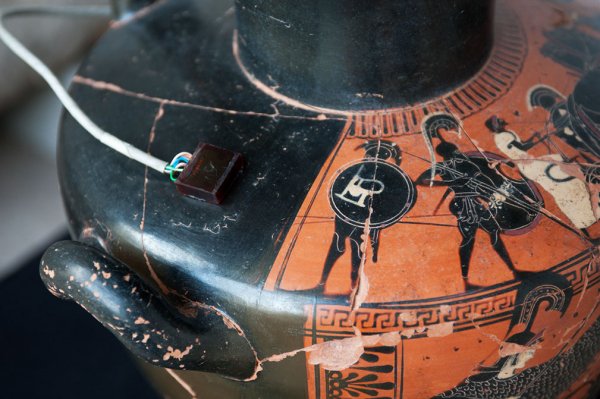 - Some 6000 works of art are moved in the sole Italy every year. This incurs exorbitant insurance costs, which often constitute the 50% of the budget for an entire exhibition. The data loggers by SafeArt are very high tech black boxes that are used to monitor critical parameters such as temperature, humidity and vibrations suffered by the artifacts as they are moved. Data are transmitted in real time to operators so to make them aware of possible hazards. These data will soon allows us to write new security protocols for moving works of art, and to remarkably lower shipping and packaging costs. 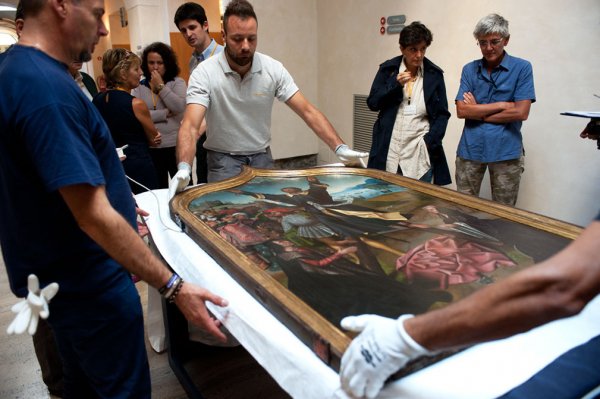 - Chiara Petrioli, the scientific leader of the Safe-Art project, earned a Ph.D. in Computer Engineering from the University of Rome "La Sapienza" in 1998. She is currently a Professor at the same University, in the Department of Computer Science, where she also act as founding director of the SensesLab (Laboratory for Sensor Networks and Embedded Systems). She also directs the laboratory of "Cyber â€‹â€‹Physical Systems" at the Research Centre of Intelligence and Cyber Information Security (CIS) of "La Sapienza,â€ and is a founding partner of the spinoff WSENSE Srl. Her research concerns on the design and optimization of wireless and cyber-physical systems. Chiara Petrioli serves as a member of the Steering Committee of ACM Sensys, and is program co-chair of IEEE INFOCOM 2016. She also was workshops co-chair of ACM MobiCom 2014 and general chair of ACM SENSYS 2013. Other distinguished membership positions include the steering committee and associate editor of IEEE Transactions on Mobile Computing, associate editor of IEEE Transactions on Vehicular Technology, the executive committee of the ACM SIGMOBILE. Dr. Petrioli was also program co-chair of major conferences in the field, such as ACM MobiCom and IEEE SECON. Chiara Petrioli has published more than 100 papers in international journals and conferences (h-index of 29, I-10 index: 76, over 3600 citations). She often serves as a reviewer for the European Commission, and has coordinated research groups for over twenty research projects both nationally and internationally, including projects FP7 SUNRISE and FP7 Genesis for which she serves as the coordinator at the European level. Chiara Petrioli was a Fulbright Scholar.

- Ugo Maria Colesanti holds a B.S. in Computer Engineering from the University of University of Rome "La Sapienza" (2006), summa cum laude (â€œ110/110 e lodeâ€). From 2006 to 2007 he worked at the Opentech Engigneering LTD as a developer of test cases for cellular platforms on behalf of the group H3G Italy. In 2011 he received his Ph.D. in Computer Engineering from the University of University of Rome "La Sapienza." Since 2011 he holds a research fellowship at the Department of Computer Engineering, Automation and Management "Antonio Ruberti" of "La Sapienza." Since 2013 he is a partner of the spin-off WSENSE srl. Over the years Dr. Colesanti has specialized in developing algorithmic solutions for low-power wireless sensor systems and networks and has acquired an extensive know-how in hardware design and development of embedded devices. During his academic career, Ugo Colesanti has published dozens of articles in the field of sensor networks, totaling over 180 citations.
- Elisabetta Giani, a physicist at the Institute for Conservation and Restoration, coordinates the sector â€œMuseotecnicaâ€ of the Laboratory of Physics and Environmental Controls. She is a professor of Environmental Physics and Cultural Heritage and Museotecnica at the School of Superior Formation of ISCR, and adjunct Professor of Environmental Physics and Cultural Heritage at the Postgraduate School of the College of Cultural Heritage at the University of Macerata. She has participated in many scientific projects for restoration and/or conservation measures of museums and temporary exhibitions, archaeological areas and underground sites, with particular focus on environmental aspects. Famed museums and locations such as the Pinacoteca di Brera in Milan, the Museo Nazionale Romano in Naples, the Gallery of Modern Art in Rome, the Ca' d'Oro in Venice, the archaeological areas of the Villa del Casale in Piazza Armerina, and the Domus Aurea and San Clement in Rome are just some of the sites where she acted as a researcher or as scientific adviser. She has coordinated several projects on new research areas, including the project "Deterioration of the surfaces of the Vittoriano. Mathematical models for the simulation of the processes of degradation of marmoreal

materials" developed by the Institute for Computer Application â€œM. Piconeâ€ of the National Council of Research, and the project "Monitoring of environmental and transport conditions" developed with the Azienda Special Palaexpo---Scuderie del Quirinale, for several exhibitions (Antonello da Messina, Giovanni Bellini, Caravaggio, Lorenzo Lotto, etc.). Ms. Giani is the MIBACT representative to the interministerial committee for the elaboration of the national strategy of adaptation to climate change. She has lectured and provided scientific advice in many projects of preventive conservation and training abroad, such as the training program in the field of restoration and preservation of cultural assets through support to the China National Institute of Cultural Property (CNICP) in 2004, to the training program for Master in Conservation Architects in Buenos Aires, Argentina in 2004-2005, the conservative project for the caves of the archaeological site of Ajanta-Maharashtra in India in 2006-2008, to Training Courses for Conservators and curators-Egyptian Museums System requalification, Cairo-Egypt in 2009, the Support to the Creation of the Central Institute for Conservation of Belgrade (CIK) Serbia, 2010- 2011, to the Training course in Stone Conservation at the National Corporation of Antiquity and Museums Khartoum, Sudan in 2013 and 2014.
#Cultural Heritage
W1 - SAFE-ART: Scatole Nere per il trasporto delle opere d'arte
2015
Back Data updated on 2022-11-08 - 10.59.34 am